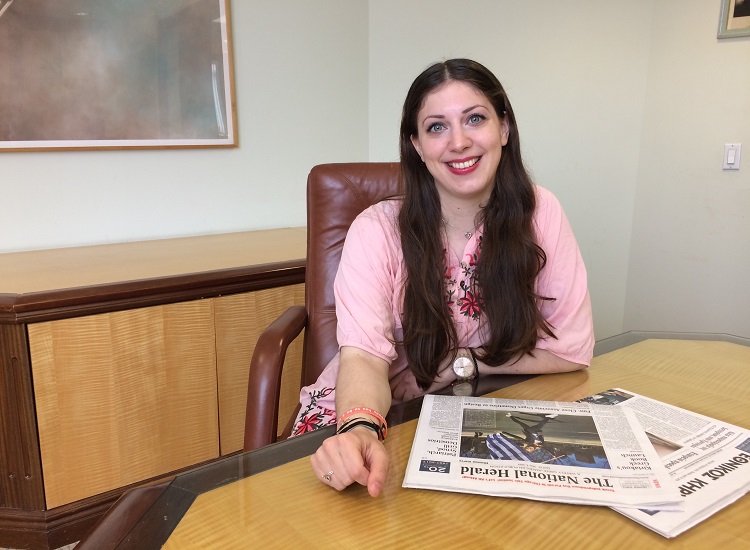 We recently had an interesting conversation that led us to the conclusion that almost everyone would rather be in the film business because it’s so appealing.

Maybe that’s why actors and actresses are so admired. But being an actor is so difficult and challenging and everyone knows how difficult it is to break into the business. A lot of hard work and perseverance is needed to get just one foot in the door. Take Esther Markakis, for instance. She is an established actress and singer in New York City and she has gone through an enormous amount of hard work and struggles to get where she is today.

She is a Greek American who was born in Athens, Greece and then she spent some time in London and decided to come to New York to be a professional actress and study with some of the best acting teachers in the world. Once she accomplished that, which meant she took several years of intensive training, by the way, she started going out on auditions and getting jobs. So, getting jobs means one has talent, which she does. She was in a Heineken commercial, a lot of short films and the motion picture Rounded Corners. She was also featured in MTV TRL Premiere as part of DJ Khaled’s intro entourage. She succeeded into making an entire crowd cheer and excited for the premiere while walking the yellow carpet on camera alongside the amazing DJ Khaled.

She also appeared in a couple of MTV TRL late episodes in which she talked to the special guests. She also sang and acted in Cranky Cabaret in its 6th-year-anniversary show. She even appeared in the hit TV show Madam Secretary and Netflix’s Unbreakable Kimmy Schmidt.

Esther is proud of all her work (and she should be) but some of her favorite projects have been the Glamour Magazine and Allure Magazine production of What I said vs. What I Meant and her performance in the off-Broadway play by Sophocles Electra. Both of those shows impacted her in different ways. What I said vs. What I Meant enabled her to inspire people to love themselves even if they appear to be different from others and Electra was like a rollercoaster of emotions for her that was one of the most challenging things that she experienced as an actor.

She feels she became a better and stronger actor because of it. Shes are also proud of having been part of the Not Dumb Questions project by the Women’s Health Magazine. In this project, Esther creates awareness about important female problems and issues, and at the same time educates and informs women about health, diet, relationships, etc. She does that in a fun way and touches on topics that women may be embarrassed to discuss.

But her latest project, The Promise of Perfume documentary, has a really special place in her heart. In this documentary, Esther explores the magic of perfumes and experiences scents and perfumes from a prestige brand. She interacts with a specialist and asks questions that will help the audience better understand how to find the right perfume. From her perfume choices to her reactions, Esther realistically and confidently dives into the world of perfume.