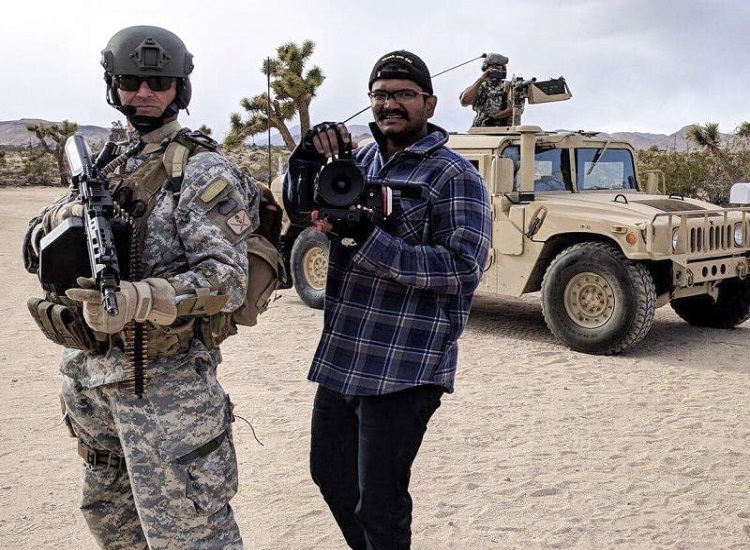 We saw the short film Juba The Iraqi Sniper, the Untold Story the other night and we were blown away by the production values of that movie. Everything was shot like a feature-length motion picture. And when we say “Shot” we mean that Sathish Shankutty’s photography was absolutely terrific! He was the director of Photography (Cinematographer) on that shoot and obviously, the director, Samir Ali, picked him for all the right reasons. Sathish’s camera movement was flawless and brought us closer to the action and closer to the characters. His backlit scenes were dramatic as well as his shots facing into the sun because it allowed the audience to see how dusty and sandy Iraq can really be. Of course, all of these elements only make the setting more believable and it also enhances the viewers’ understanding of what life and real combat might be like in that kind of atmosphere.

If Juba The Iraqi Sniper, the Untold Story was the only film that Sathish ever shot in his life, we would have to say that he was an exceptionally talented cinematographer. However, there is a long list of films that he has contributed to that basically show the same kind of care and thoughtfulness that Sathish brings to a production and the producers and directors must all be counting their blessings when they look at the daily because they know that they somehow lucked out when they were able to sign this man from India who now lives in Los Angeles, to work on their film.

They can see his passion and his understated knowledge of how light works best in each shot. When they watch him work it similar to watching a master sculptor create something substantial from a block of untouched wood or marble. Sculptors and cinematographers only get better with each piece they form and with each film they shoot. They become masters and then they don’t stop there.

They continue to learn even though it might appear as though there is nothing left to know. It’s as if they are quietly and intuitively moving toward perfection right in front of us and they don’t even know it, they just keep moving forward. Sathish takes his work and his passion very seriously and we, the movie audience are the ones who benefit the most from it.